Now that I have finished my stint in a semi-corporate setting in a security company, i can let you know a little bit about how things work.

These companies do business here with the permssion of the Chinese government. This means that they are under the constant supervision of the Public Security Bureau. As such, they censor themselves and many of the reports they provide their clients in order to maintain the goodwill of the CCP and continue to do business.

I myself had to delete two posts because they contained viewpoints and information that at the time could have gotten back to the government, then to my company and might have hurt people who have nothing to do with me or my political views.

After all of the free thinking words i write in here, it really hurt to have to censor myself, but i did it because hurting someone so I could have a cute blog is inappropriate. Well, things have changed so I can re-post them here today.

I know there are a couple security guys here who read my blog and get annoyed with what I say. They have labeled me a “left wing anti-establishment guy who could never fit into a corporation”

to you i say: thank you very much, i appreciate the compliment.

The self-censorship of the security community here has led them to make the same type of mistakes the US security establishment made leading up to 9/11. The establishment naturally rejects analyses and viewpoints that do not mesh with their convenient worldview. Such is the case with all establishments.

The only saving grace is a conversation i had with a security guy in which he said that the intelligence community is now looking for people like me to turn the coat and work for them, because we don’t stand out like sore thumbs and our perspectives, although anti-establishment, are also valid and sometimes much more so than the “professionals” they have working for them now.

here are the deleted posts, the first one was called:

This is how governments treat the people. All over the world. No matter where, no matter what the situation. Even if the government manages to re-build and re-store — never will they take responsibility.

Last night I read about the US government’s response to the shooting of an Iranian passenger jet by the American warship Vincennes in 1988 — denying everything then paying them off ten years later.

Today I read about the Chinese buying off the parents of children who were killed by the earthquake and shoddy construction. At least the Chinese pay people off right away …

Basically many things the Chinese promised to have in place for the Olympics will not be in place. I’ll start with the media:

All news networks that use mobile broadcasting vehicles will have to register their routes and broadcast plans in advance with the PSB. Beijing residents have been warned to either keep their mouths shut when meeting foreign press or better yet toe the Party line. The huge media building set up for the thousands of journalists coming through to cover the Games will be sending their reports through a controlled and monitored Internet pipeline.

Many longtime China-based journalists manage to get around these restrictions, but the point is that China promised unfettered media access. Of course, anyone who believed this is a fool.

Another media issue with serious implications: NBC’s coverage of the Games must first go through the Chinese pipeline before it is sent to the world. All TV broadcasts — I repeat, ALL TV BROADCASTS– will have a 10 – 45 second delay on them. The Chinese first said 45 seconds, the media haggled it down to 10. But in the end, this is just another “promise” from the CCP that should be considered worthless.

This means that what you think is live happened from a few seconds to almost a minute ago. So protests or things of that nature will probably be scrubbed from TV coverage, giving any activists much less of an incentive to hold up the “T-sign” in support of Tibet or flash a Dalai Lama medallion or any other “anti-China” demonstrations.

As for pollution, I will put up a couple pictures later tonight of the view from my building. Beijing has not met the requirements, period. We have some days where I can not see the building 100 meters from my window and some days where it is clear and cloudless. What this means for the Games is hard to predict, because the real serious policies — road restrictions, construction bans, factory closures etc. –do not begin until tomorrow. We might yet have clear skies …

And as for money issues, Visa, McDonalds, GE and other foreign firms have banded together to force the Chinese government to honor their pledges of marketing the companies’ brands during the Olympics. What has happened is, the Chinese have accepted a huge payment for these companies as sponsors and then reneged on their promises for exposure by giving Chinese brands such as Haier and Lenovo prime coverage at the expense of foreign companies. In response to the complaints from Visa and friends, the CCP said: you are getting enough coverage, period.

And as for security, the Chinese require that all foreign companies and entities that need security details must hire from a Chinese pool of companies and talent. If they do not hire Chinese, they do not receive their registration papers. There are three plans available for companies to choose from: a 160 man detail, 120 man detail and a 90 man detail. Normally, a 90 man details would cost about 150,000RMB. The prices have risen to 4 million RMB for the Olympics.

The Chinese are restricting foreign access, smothering the media, covering up their pollution and raping foreign companies trying to do business during the Olympics. These are just a few examples, if I write any more I might risk my access.

Is this unprecedented in Olympic history? Do all nations play this game when hosting the Olympics? Are we naive to suggest that the spirit of the Games should come before political concerns and security? Listening to people in Beijing speak of the Olympics, I find all agree that the situation is tense, draconian, staged and nationalistic.

At the same time, I notice that if you walk away from the glittering buildings and massive venues, you will find side streets filled with curious and hospitable people. It reinforces my belief that the governments of the world are to blame for our social ills and if we as people can (like true socialists and capitalists) just meet without their interference, we could solve many of these problems over tea and cigarettes.

Governments distort and de-humanize … but I am yet too weak minded to come up with alternatives in this modern world.

The scary thing is I thought it would be counter-productive for Muslim terrorists to bring China into the War on Terrorism as an active force. Right now China uses the whole deal to do what it does best: crush its own people. But i was informed yesterday that a united front of anti-terror states like Europe, US and China would lead to a united Muslim Front, which is the end goal of the Muslim terrorists

So it makes sense for them to attack here. Does it make sense for me to be here?

The other one was called:

After just a few days here, i have been briefed on security, given dozens of pages to read and have spent hours rolling around the city. All of this week will be spent in the sweltering heat checking the venues for security gaps and figuring out evacuation routes.

As of now, I believe that the authorities are in no way prepared for serious attacks and that if something does indeed happen, it will be chaos. Now any country hosting a big international party is vulnerable and there is no reason to single out China — chaos ensues wherever there are bombs and such.

I guess what i see here is just typical Chinese BS as opposed to typical German or Greek BS.

— All of the prostitutes have been kicked out, the Mongolian, Russian and now even the local hussies have been swept from the streets and remain in hiding.

— random sweeps of areas like San Li Tun net all foreigners (and a few locals) who have no ID with them i.e. passport. They also pick up every black man they see — recently deporting 40-some Nigerians

— it is illegal to send water, electronic devices or other such things to Beijing via the mail

— they have missile batteries near the venues in case of air attack.

— there are 100,000 anti-terrorism troops and 350,000 volunteers. I have seen these people. The “anti-terrorism” troops are average run-of-the-mill guards with new uniforms. They have no special training, not even first aid. The other 350,000 are random “volunteers” such as an Anhui girl selling clothes in the silk and pearl market and random civilians with red armbands. They are responsible for their areas if the poo hits the AC.

These are to me classic Communist control methods and I would expect them to happen in China from time to time regardless of what the situation is … but they don’t make me feel safe.

The metros are unsafe, the shopping centers are unsafe and Beijing is not that easy to navigate — even with all of the ring roads. Restrictions placed on vehicles and such near the venues hamper as much as protect and typical stonewalling from the local police keeps foreigners in the dark about possible threats.

Basically, China has spray painted the grass green, sent out all undesirables, thrown hundreds of thousands of half-cops onto the streets, made a bunch of posters and promises and put flowers everywhere to make the place look beautiful and modern and on lockdown. But its a paper thin lockdown. Anyone who really wanted to make problems here would be able to do so with ease.

China has good relationships with all of the pariah states in the world. Sudan and Iran are both friends of the PRC. North Korea is a trusted lil buddy, so China believes few international terrorist orgs or states want to upset the Olympics.

For China, the threat is domestic in the form of “extremists and splittists” in Tibet and Xinjiang and international in the form of Western NGOs and human rights orgs who may stage a public protest. So they crack down hard domestically, shooting up Uighers and having a strong Party presence in the monasteries, while keeping a tight grip on all the foreigners through the registration and visa process.

The most Westerners would do is (for example) throw a fist up for Tibet or disseminate posters in support of the Falun Gong, but these things will not cause chaos. If anything, they will re-enforce unity. So although China is very nervous about the Olympics, at the same time I get the feeling that they do not believe anyone would really bomb them. After all these years of non-intrusive international diplomacy, it would indeed seem crazy for any foreign nation or terrorist group to attack China. But this, of course, is provided that China is the target.

But if one believes that any nation attending the Games is a target (ahem: the US), then the face-based security measures that China has in place seem not only feeble but bordering on the tragic: a thin veil of colored rice paper meant to stop a bullet from hitting the guest ..

PrevPreviousDont Believe the Hype
NextBack in the Du part DuNext 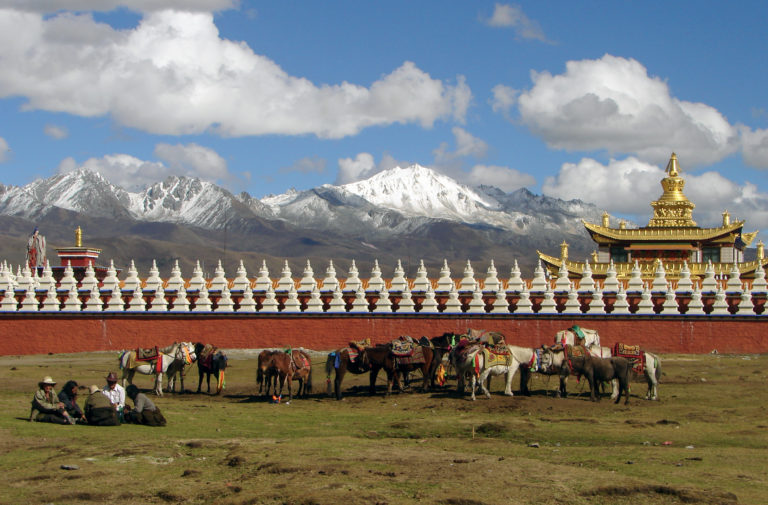