Today has been a very weird day so far. Last night I drank late late into the night with some security guys — old warhorses from Ireland and such — and they said i fit the profile of an “agency man.”

This morning I was helping Jim Leprino, one of the richest men out there, recover his Opening Ceremony tickets.

Thousands of people have found out that their Opening Ceremony tickets are fraudulent and will not be accepted at the gates. People paid 3000USD and up for these tickets, getting them off of Craigslist, Beijing tickets.com and other spots and none of them will be able to see the Opening Ceremony. For you people at home, perhaps the birds nest will look a little empty.Its not yet clear who is responsible (HAHAHAHA), but I am sure we’ll find a sneaky bugger at the end of the line. So far BOCOG s hiding its head in the sand and doing nothing about this, because too may people have been affected:

We’re talkin all of Nike’s tickets, all of Google’s tickets … and several thousand regular Joe’s who also can’t get in.

They are walking the streets now trying to scalp some tickets off of people. There is so much to write actually, but my head hurts, i need to work at 4pm, i have been up all morning getting Leprino his tickets — ended up that some of the Sponsors have”extras” and certain people are able to get their hands on them. A lot of people have been royally screwed by this ticket scam …

anyway. Here are some pics of my smurfy ass (smurf=rent-a-cop) and that sunrise i mentioned several posts back. Since that sunrise, every day has been gray and dreary. You can stare directly into the sun … on this day (below) i could barely open my eyes. 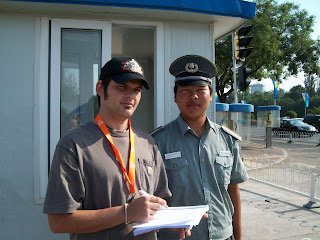 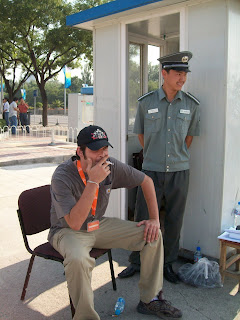 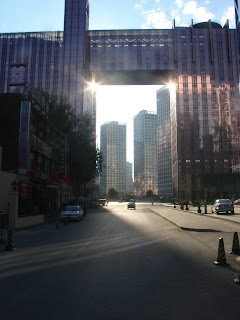 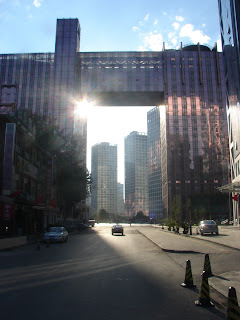